A little about us and our team..

Melbourne Trivia Company was started in 2002 by Alan Lovett who was tired of presenting out-dated and bland trivia nights for someone else.

Finding that his experience as an entertainer made him a popular host, Alan decided to use only experienced professional performers as presenters. We now have a great team of talented hosts (see below).

He also decided to re-write the programme, keeping the better aspects of ‘traditional’ trivia nights whilst introducing new ideas and relevant questions. Melbourne Trivia was the first trivia company in Melbourne to use computers to seamlessly integrate multimedia into the programme. We have worked on the games we play – our invention of Hip Golf, specially designed for trivia events, was even exhibited by Innovic, the State Government’s innovations initiative.

Among policies Melbourne Trivia has introduced is our commitment to finish events by 11.15 pm so that parents can relieve their baby-sitters. We also have a policy of not playing sleazy or humiliating games.

The lively paced programmes and modern approach have made Melbourne Trivia very popular, and we keep analysing and working to improve the programme.

Melbourne Trivia’s hosts come from a variety of show-business and entertainment backgrounds. They are selected for their sense of humour, their professionalism and experience and their love of trivia. Unfortunately, they are all often in demand and, while we will try,  we can’t promise you the host of your choice for your event. 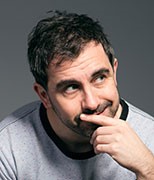 Yianni
Yianni is an Australian-born comedian. A popular performer in the UK as well as here, he has made frequent appearances at the Edinburgh Fringe and the Melbourne International Comedy Festival as well as performing in other overseas countries including South Africa.

Those of you who have experienced our trivia events know that our hosts are usually supported by one of our team of fabulous assistants, all of whom also have considerable talents outside Melbourne Trivia.

Scott keeps the sound and vision going at many of our events. He has created puppets and stage and screen props as well as being an award-winning comedy writer and a truly individual person. He has also won awards for jumping into the River Yarra

Justin is our indispensable business guy. In an organisation mainly made up of performers, we need someone with their feet on the ground. Although, when he’s not working, his feet are usually on the bike pedals – his and his partner’s cycling adventures in the last few years have included a jaunt around the island of Hokkaido! Yeah – the place full of mountains!

Janet did a wonderful job as host, so did her assistant. A great night. And the questions were so much better than (name of other trivia company deleted) did last year. They were just right for our group.